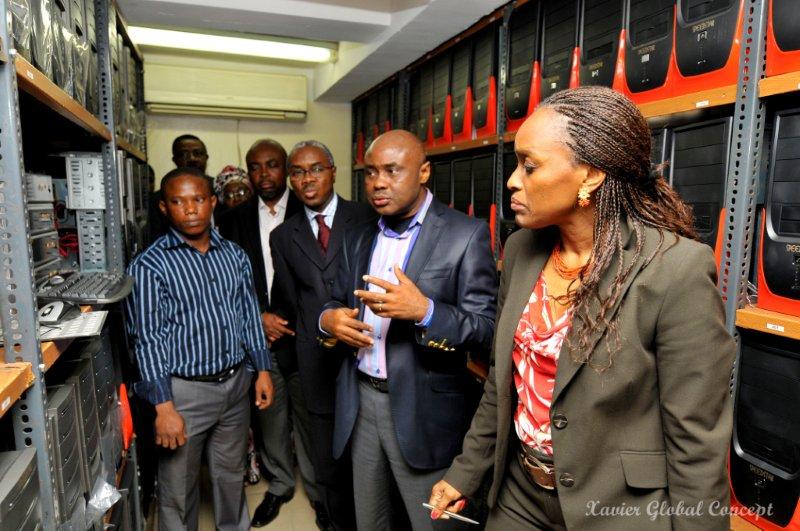 There are strong indications that the market for locally manufactured personal computers in the country will soon get a huge boost as the minister of communications and technology, Omobola Johnson, at the weekend unfolded plans by the federal government to partner with Nigeria-based indigenous PC manufacturers, including Beta Computers Limited, on a Students PC ownership scheme.
Johnson gave this indication when she visited the Speedstar Computers brand manufacturing plant of Beta Computers Limited. She disclosed that the scheme was a public-private arrangement expected to equip Nigerian students, in tertiary institutions for the first phase, with notebook computers and relevant content and broadband connectivity needed to face the challenges of bridging the digital divide and emerging world knowledge economy.
The minister who was excited by the motorized conveyor driven assembly plant of Beta Computers assured that the scheme when fully implemented would create thousands of jobs in the country for a lot of Nigerians who would be involved in not only the manufacture of these computers, but also the distribution, sales and support of the deployed computers.
Earlier in his response, the managing director of Beta Computers, Will Anyaegbunam was full of praise for the minister for conceiving the laudable scheme and the methodological way and the thoughtfulness that is very evident in her approach to its implementation. He assured her that “We are ready to partner with the government on this scheme. We have the capacity to do that with our high quality Speedstar range of computers”.

We are an Information Technology Solutions Company that partners international business management solutions manufacturers such as Sage Software Inc., Microsoft, Ivend Retail, Atlanta-IT, and ZOHO. We are Original Equipment Manufacturer (OEM) of SPEEDSTAR range of personal computers accredited by the Federal Government of Nigeria for purchase by all her Ministries, Departments and Agencies.